The Ministry of Economic Affairs is considering restricting radiation from radio masts nationwide. Due to the roll-out of #5G, a proliferation of antennas is expected, including in lampposts and bus shelters. This could potentially pose a threat to public health. 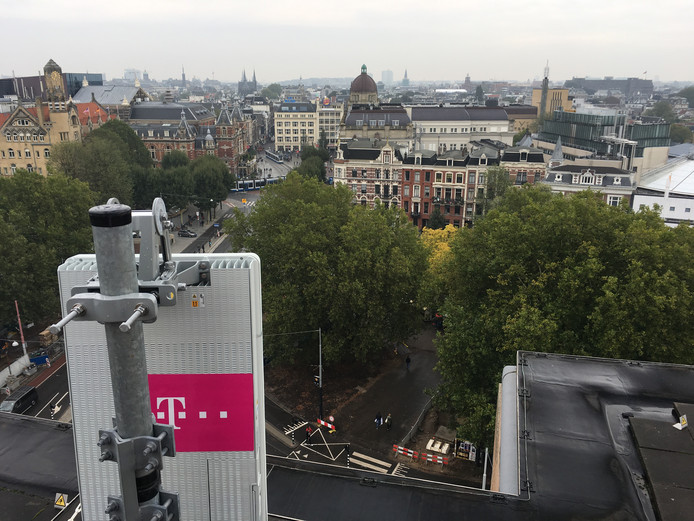 T-Mobile launched the first 5G antenna of the Netherlands in Amsterdam at the end of last year – by way of experiment -. If it is up to the government, 5G will be rolled out throughout the Netherlands in 2020. That means a considerable increase in transmission masts.

A document from the Ministry of Economic Affairs states that ‘consideration is being given to establishing standards for electromagnetic fields’. Now there are no nationally determined limits for the radiation released by transmission masts.

“With the roll-out of the new 5G network, we expect more antennas in the streets in the coming years”, explains a spokesperson for the ministry. “Now you see the antennas on masts, roofs of flats and other high buildings. More ‘small cells’ will be added, think of antennas in lampposts, bus shelters and advertising pillars. “

According to the spokesman ‘does that something with the radiation’. “We want as much security as possible for citizens that electromagnetic fields from the antennas do not pose a threat to health in the living environment, even if there are multiple antennas in the immediate vicinity.”

At the end of last year, 180 scientists from 36 countries warned about the potential risks of the 5G network still to be built. The radiation density will increase considerably, but the consequences for public health are unknown. The scientists state that some studies show that there is a link between radiation and brain tumors, Alzheimer’s disease and infertility in men.

‘5G important for the future’

Despite this warning, State Secretary Mona Keijzer of Economic Affairs is certainly planning to roll out a national 5G network by 2020. According to her, 5G is important for the future of self-driving cars, drones and fast internet connections on mobile phones.

Congregation now assessing whether a new transmission mast may be installed. Already in 1999 a European directive with limits for electromagnetic fields was drawn up, but this has not been legally introduced in the Netherlands. “It is not the case that radiation is not taken into account now, municipalities look out for this, on the basis of a covenant with telecom providers,” says the spokesman for the ministry.

Stricter standards across the border

A comparative study by the National Institute for Public Health and the Environment (RIVM) – in January this year – shows that the Netherlands belongs to a small group of countries in Europe where no nationally defined limits apply to radiation from telephone transmitters. Most European countries adhere to the European directive, but in for instance Belgian Flanders the government is much stricter: in the vicinity of schools and care homes, the radiation power of a telephone terminal may only be 7% of the EU standard.

The standards are also considerably stricter in countries such as Italy, Luxembourg, Poland and Croatia than in the Netherlands. The differences are great because scientific research has not yet established beyond any doubt that radiation from radio masts is not dangerous to public health.

For example, the GGD in Amsterdam says that ‘we do not know much about the long-term health effects (such as cancer) of living in an electromagnetic field around mobile telephony antennas’. That is because the antennas are only relatively short. “The strength of these fields is generally so low that health problems are not expected”, according to the GGD. Some people are convinced that their health problems are caused by these antennas. They reported very different health complaints at the GGD such as headaches, fatigue and loss of concentration.

The Netherlands currently has over 45,000 antennae for mobile telephony (GSM, UMTS and 4G). That number will increase enormously in the coming years as the new 5G network is rolled out. “5G can work at a higher frequency,” says the spokesperson for the ministry. ,, That means more capacity, but the range of an antenna is less. As a result, many more small channels will be needed, which will appear everywhere in the streets. “ “For high-voltage cables, stricter rules already apply in the Netherlands, because research shows that there is probably a link between the radiation from high-voltage lines and childhood leukemia. Therefore, no houses or schools may be built near a high-voltage line.

5G can work at a higher frequency. That means more capacity, but the range of an antenna is less. As a result, many more small channels will be needed, which will appear everywhere in the streets. “